Showing posts from December, 2008
Show all

News Flash- we has update on reindeer apparel! 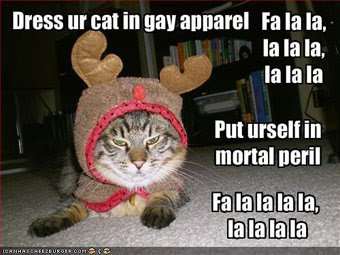 My pal twolf sent me this from I can has cheeseburger, after reading the post below. Case closed. Purrfect, twolf. Huge thanks! Direct I can has link is here
2 comments
Read more 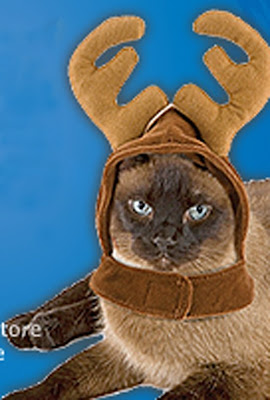 Oh, and Merry Christmas! See you all next year. No, I don't have a cat, right now. And, except when I was well under ten years old, and also had cats available, I have never had the impulse to dress them up in costumes. But, from my various YouTube adventures, I have learned that presumably sane adults do this kind of stuff to their cats, as in the YouTube below. Let me just say that had I been so inclined, I would have chosen a somewhat classier version of the reindeer costume, for example the one shown in the picture to the right. Kitteh Reindeer Costume FAIL Direct link is here (0:43) Fine and dandy- if humans choose to dress up as reindeer or aardvarks for Christmas, well that's their responsibility... as this clip below from one of my favorite movies, "Better Off Dead", amply illustrates. I'm just not a big fan of "kitteh costumes". Cats have an innate dignity that humans often lack. Excerpt below is "A Christmas Miracle". I
Post a Comment
Read more 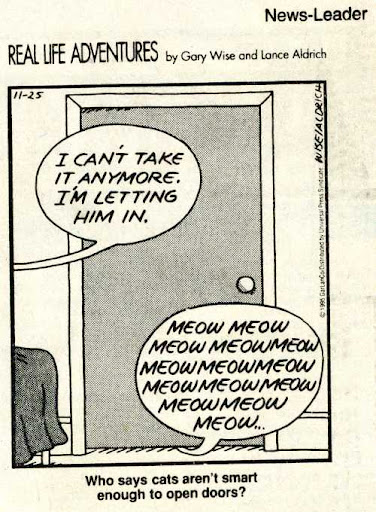 Whatever works! Course, some kittehs are so independent and so smart that they can open doors without calling in their humans- as seen in several previous posts here. And, the example below really wasn't much of a challenge- one of those "lever" door handles. Still, there did seem to be a bit of kitteh collusion going on... And, unless I am mistaken, I see a cat door... which was not the method of choice for travel! Direct link is here (0:12) Human says: Our Maine Coon Cat Gizmo. With his size and his 20 pounds, he is able to open doors very easily! :-) And, p.s. Marion in Savannah, thanks for your kind comment and concern. I got laid low with some awful chest cold that was going around- went through 5 big bottles of cough syrup. And, also there's that day job stuff, which is particularly intense this time of year. Plus the holiday season. I am going to Christmas in Connecticut, to visit the home of "the awesome equine cat brush". So, I'll
1 comment
Read more 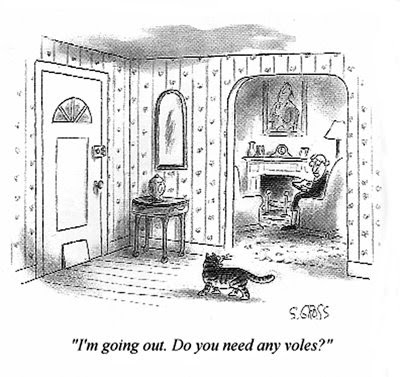 Another take on "cat presents"--- I've gotten into looking for cat cartoons, just for a change of pace from YouTubes. A friend sent me this one. Perfect timing.
2 comments
Read more 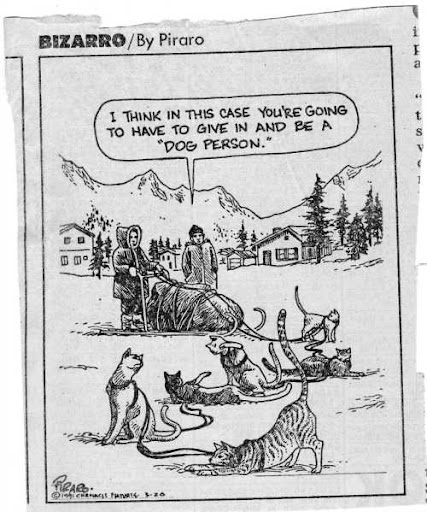 I found this great cartoon here . The blogger is, among other things, a kitteh lover and cartoon clipper. Go to The Haven , and check out her interesting site.
2 comments
Read more

The following is absolutely the longest YouTube I have ever posted. But, I have to say that I was really howling with laughter, because I found it after finding the cartoon above. I think that the cat capture takes place at about 4:35, but you have to watch carefully to see it. And, about that time, I think I heard one of the rescuers say "wait til you get the bill for this!" And, read this, before you watch, because this is not altogether a laughing matter. The Bloomsburg Fire Department is a "Volunteer" fire department. That means that the men and women who serve do so because of their dedication to the community, amidst day jobs. I grew up in the greater Lost Angeles area, and I didn't even know that some places, many small towns, rely on local volunteers to staff the Fire Department. I learned that when I started visiting Maine, where again, it is the goodness of heart and the dedication of local heroes that makes for this essential fabric of com
Post a Comment
Read more

Human says- My cat brought home a present (his first present ever).... at least wasn't a dead bird. I say- really, a MOST unusual present... LOL Direct link is here (1:56) The graphic above is one of many from the absolutely hilarious guide How to tell if your cat is plotting to kill you . Okay, everyone who's ever had a cat has probably been presented with a "present" at one time or the other. And, they aren't always dead. One of my cats woke me up in the middle of the night to drop an only slightly used/ wounded gopher on the kitchen floor. Good kitteh. The gophers had been laying waste to the vegetable garden. So, I have a question for Matthew Inman , creator of the guide (or for anyone else, for that matter- some astute kitteh commenters here)--This woman's cat brought in a "present" of lichens and a leaf. How would you interpret this behavior?
Post a Comment
Read more

By VG - December 05, 2008
There are gazillions of YouTubes of kittehs chasing laser pointers. This is one of my favorites, with music added by me: Direct link is here (1:44) I have recently discovered that many animals will chase or try to eat that little moving red dot, including frogs and fish. Frog: Direct link is here (1:04) Fish: Direct link is here (2:25) Not the greatest video quality, but the best of the bunch- but still, fun to watch. And, WARNING- turn the sound WAY down before you watch. OUCH! Uh, I like the kittehs the best. Just biased, I guess.
Post a Comment
Read more

Be very careful... kitteh is watching..

The graphic below is one of many from the absolutely hilarious How to tell if your cat is plotting to kill you . I urge to check out the whole thing, at the link above, and then click through to find more wonderful work from this astute cat observer, and awesome web designer. I found the "guide" a while back, and I laugh every time I find a YouTube that provides further evidence. Direct link to YouTube evidence is here (1:19)
3 comments
Read more

Uh, well, I guess I haven't been keeping up! The Box Cat has a gazillion YouTube hits, for good reason. Direct link is here (2:06) Hmmmm... can you help diagnose "Box Cat"? According to the choices in the final illustrations, I'd say he is a "classic tabby", but alas that really doesn't help too much in explaining his behavior. lol. Here's a closer look at "Box Cat". Direct link is here (0:32) Diagnostics: L to R: Mackerel tabby- narrow dark striping around tail and legs, solid or broken stripes down sides and one or more necklaces on chest. Classic or blotched tabby- large "oysters" or blotches ending in circular pattern along the sides Spotted tabby- smaller dark patches formed into oval or round shape.
7 comments
Read more

Box cat- In case you missed this one!

By VG - December 01, 2008
My friend Punaise sent me this a while back, which was posted by watertiger at her site Dependable Renegade And, now I see why watertiger titled the post "Box cat is back at it"! Direct link is here (0:29)
2 comments
Read more
More posts