I searched for pictures of white cats of the respective breeds, thinking it would be easier to see the differences, without the distraction of the markings, which are basically the same. I found great photos of white Norwegian Forest cats, here, but, none of white Maine coons that I could use. UNTIL... I found Trilloteam, a cattery in Italy passionate about Maine coons. I posted a wonderful video from them Maine coon kitties from Italy- the "Awesome Eight".

The following photos seemed the best to illustrate the differences in looks between Norwegian Forest cats and Maine coons. Don't get distracted by the difference in "fluffiness"- The female Maine coon Ofella Bonitatis is only about a year old in the photos, and it's summer time! Coat thickness develops with age, and is way heavier in the winter time.

And, this is the white Maine coon Ofella Bonitatis via Trilloteam in Italy, here and here. 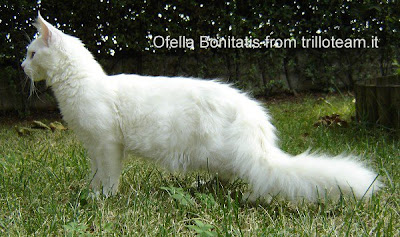 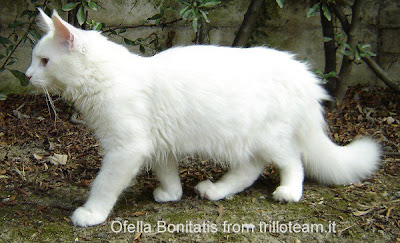 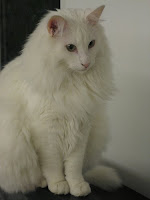 Both breeds are long, lithe cats, with huge fluffiness, and lynx-tip ears. But, pay attention to the head shapes, especially the profiles- the more angular profile and head shape is "classic" Norwegian Forest cat shown in immediate right photo (via noeoracio) whereas that sweet upturned nose is "classic" Maine coon (via Trilloteam). Can you see the difference? 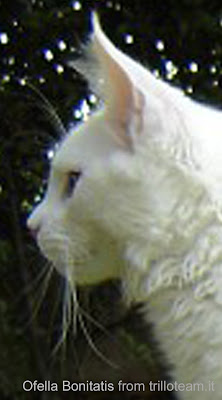 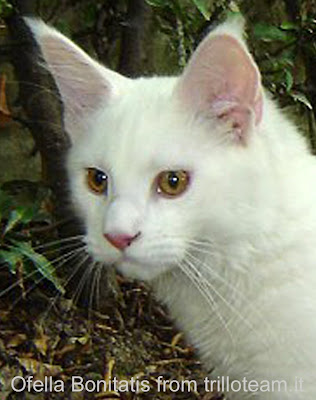