One person answers the question on a forum website and they say that Cartoon Cat is not a creepypasta. Yes, there was one answer to the question. Now there are two!! What is creepypasta? Who is Cartoon cat? As I understand it, "creepypasta" is a sort of slick, hip but misleading description for unnerving stories posted on the Internet designed to shock people.  It seems to me that the scary Cartoon Cat could be involved in a creepypasta story. His whole reason for existing is to scare people and create creepypasta so I disagree with the guy who says that Cartoon Cat is not creepypasta.  I think I see the point, though. The individual character called Cartoon Cat is not creepypasta because he is an individual. However, he can be involved in creepypasta horror stories because that's his purpose in life. Phew, I think I've got that out of the way. Cartoon Cat. Photo: Fandom.com It is a bit surprising because when I went onto the search engine Bing looking for "ca
1 comment
Read more 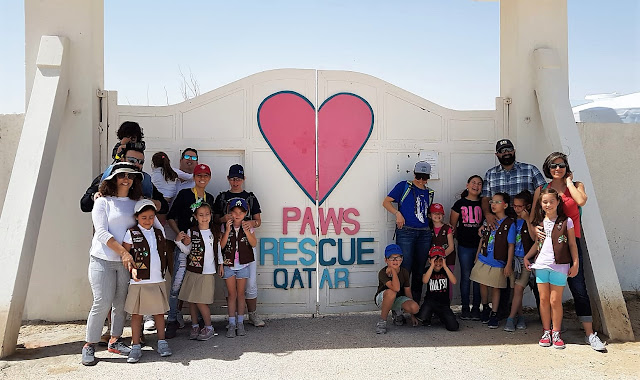 NEWS AND COMMENT: A British charity called Paws Rescue Qatar (PQR) has done some sterling work since 2014 when it was founded by Alison Caldwell and Vicky Lamont. Essentially they rescue abandoned cats and dogs from the streets of Qatar. This is an incredibly hot country with temperatures sometimes reaching 50°C. These abandoned animals can barely survive under these killer temperatures. Further, the locals, the Qataris, often treat street animals as pests which translates to being cruel to them. The founders of PQR say that locals sometimes run over them deliberately to kill them or they poison them and beat them et cetera. Paws Rescue Qatar. Photo: PQR. Here are some points to make about this excellent British charity which has saved the lives of hundreds of animals. Either the owner of the land on which their current facility is located, or the owner of the facility itself or the local authority have told them that they have to move very soon. The news is devastating to them. Se
Post a Comment
Location: Doha, Qatar
Read more

The ultimate safe, high up hiding place for a cat terrified by the sound of a vacuum cleaner 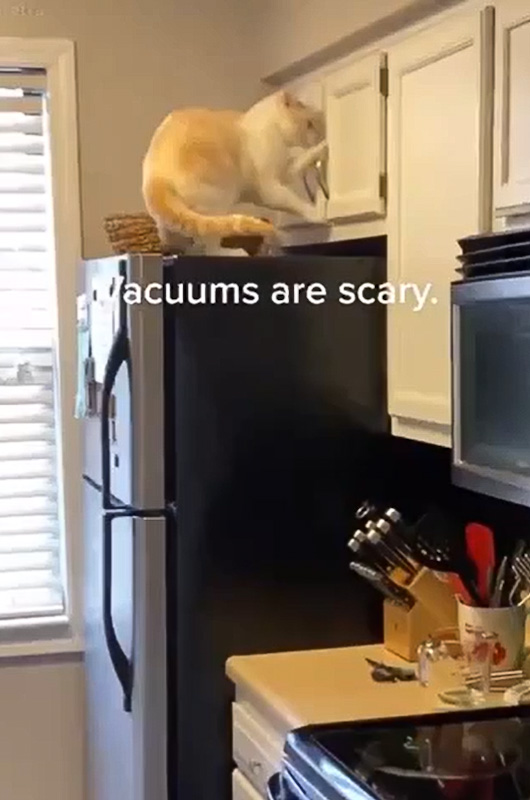 It is the best example I have seen of a hiding place for a frightened cat. She climbs as high as she can, opens the cupboard door and it closes after her. Total security for the amount of time that she needs it. RELATED:  20 tips for the new kitten or cat owner   The ultimate safe high up hiding place for a cat terrified by the sound of a vacuum cleaner. Screenshot. We know that it is useful to have high places around the home and hiding places for timid cats to hide in. In this instance the cat has found both at once. She's definitely done this before and probably many times. A vacuum cleaner nearby has terrified her and off she dashes to safety of her hideout. It is cool and sensible. I expect that she crept out about ten minutes later and life returned to normal again.  RELATED:  Not All Domestic Cats Hate Vacuum Cleaners Note : This is a video from another website. Sometimes they are deleted at source which stops them working on this site. If that has happened, I apologise but
Post a Comment
Read more 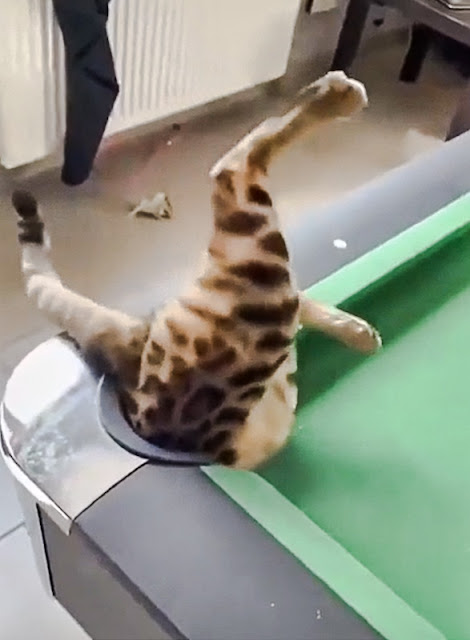 Domestic cats can be like squidgy tubes of toothpaste the way they wriggle into small spaces. Bengal cat dives into corner pocket of billiards table. Screenshot. The is strange to say the least but it is all in play. That said I am astonished how easily this glamorous Bengal cat dives into the corner pocket of a billiards table with complete ease and nonchalance and disappears. Following in his footsteps is his kid who pokes and prods him as he has turned around inside the pocket. I thinks he makes a habit of it. Cats have an extraordinary ability to get into small spaces because of their flexibility. They are like a tube of toothpaste sometimes. RELATED:  Domestic cat squeezes through 4 inch height gap under sofa . Note : This is a video from another website. Sometimes they are deleted at source which stops them working on this site. If that has happened, I apologise but I have no control over it.
Post a Comment
Read more 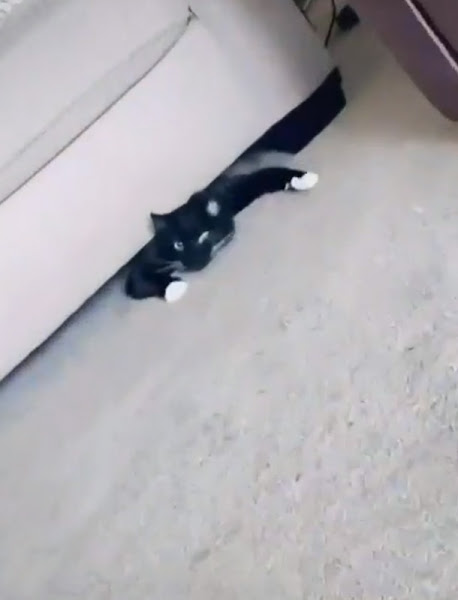 I have seen this before with a Ragdoll cat. It always surprises me a lot. It just goes to show how flexible their bodies are. Another aspect of the domestic cat's altheticism. RELATED:  Ragdoll cat slides under sofa with 7 centimeter gap Note : This is a video from another website. Sometimes they are deleted at source which stops them working on this site. If that has happened, I apologise but I have no control over it.
Post a Comment
Read more

Why do magpies hound domestic cats when they are non-aggressive?

You will see videos of magpies gingerly going up to domestic cats while they are resting and pecking them with their beaks. The birds keep a healthy distance between themselves and these passive and unaggressive cats until they approach. Why do magpies hound domestic cats when they are non-aggressive? Screenshot. They sneak up to the cat and peck them. They immediately retreat. They are aware of the danger. Their behaviour is based upon conflicting decisions. They want to protect their offspring proactively because this is the season for magpies to create kids!  Note : This is a video from another website. Sometimes they are deleted at source which stops them working on this site. If that has happened, I apologise but I have no control over it. But also they know that cats are dangerous to them and therefore it seems they are pulled in different directions. Their desire to protect their offspring overcomes the fear of cats. They get away with it because they are agile and clever. They
Post a Comment
Read more 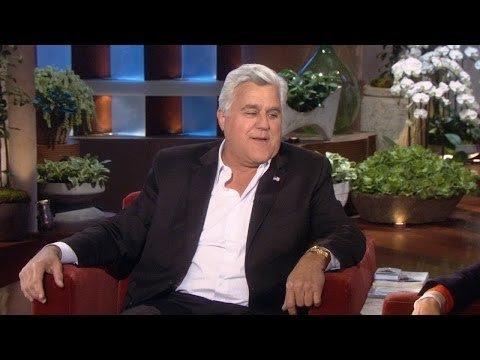 This is Jay Leno proving that cats are smarter than dogs with a video that he made. I think he's a great guy. For a start off he loves cats. That's an instant qualification for being a great guy. And he has a great standing and status in society through his previous television work and his character. He has a really nice character which comes across in his YouTube videos about his 'garage' (car museum) and his love for cars. Yes, he loves cats and cars. There is a nice symmetry to that. Note : This is a video from another website. Sometimes they are deleted at source which stops them working on this site. If that has happened, I apologise but I have no control over it. He has a massive collection of very valuable cars which he can afford because he has a massive fortune. I don't know how much he is worth but it must be in the hundreds of millions of dollars. His car collection must be worth hundreds of millions too 😀 . And he lives in California as I remember where
Post a Comment
Location: California, USA
Read more 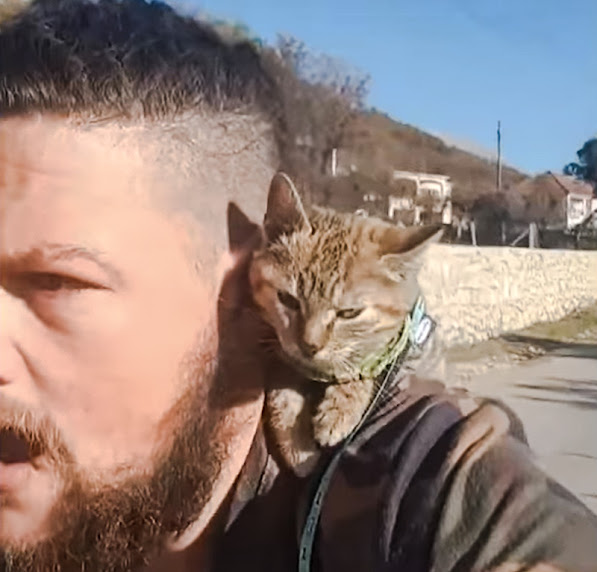 The video is self-explanatory. It is a excellent story. Kitten, Nala, changes Dean's life on round the world bike ride. There are a few videos of a similar type on YouTube. I like this one. Dean's round the world bike trip was improved when little Nala came up to him. It looks as though it happened in a dry country perhaps the Middle East somewhere although we are not told.  Kitten changes Dean's life on round the world bike ride. Screenshot. It is nice that Nala had the courage to approach him. Desperation, I guess, drove her to find a human caregiver. It is interesting; it confirms that domestic cats are made to live with a human. That's their destiny and when they are without they seek out a caregiver.  RELATED:  Ginger tabby cat rests on human companion’s shoulders while he rides a motorbike at 30 miles an hour Nala was domesticated as she fitted in to Dean's life immediately. She'd been dumped as he said. Terribly cruel behaviour. He wanted to find her a ho
Post a Comment
Read more
More posts