By VG - March 24, 2009
Pierre Bonnard was a great painter of cats. But, not in an obvious way. The cats are never the focal point, if there is one single focal point in Bonnard's paintings.

Apart from Bonnard's portraits of Ambroise Vollard with his cat/s, the cats are less obviously presented. But, if you look with an attuned eye, the cat is THERE, just as a cat always is. Not just "there", but often the most animated and intent being in the room. 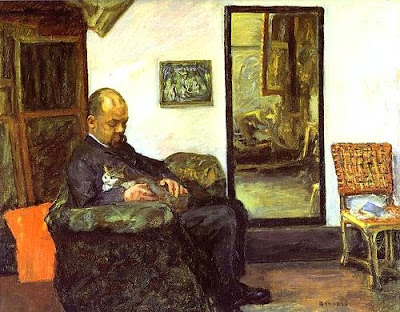 First, Ambroise Vollard the art dealer, and then on to Pierre Bonnard the painter, both important in their own ways.

Ambroise Vollard has been the subject of a special exhibition from the Musée d'Orsay , also shown in New York and Chicago. Quotes below are from those sites, and linked.

~~This is the first comprehensive exhibition devoted to Ambroise Vollard (1866–1939)—the pioneer dealer, patron, and publisher who played a key role in promoting and shaping the careers of many of the leading artists during the late 19th and early 20th centuries. ~~ Quote here.

~~In 1887 Ambroise Vollard (1866–1939) arrived in Paris with few contacts and no credentials to pursue a career as an art dealer. He began representing artists that were undervalued, exhibiting them at a time when many galleries were not willing to take the risk. In 1895 Vollard hosted Cézanne’s first solo exhibition, and in doing so he made the artist’s reputation as well as his own.

By the early 20th century, Vollard had become the principal dealer of artists such as Paul Cézanne, Paul Gauguin, and a number of Fauve artists, and lent early support to artists who are well known today—Pierre Bonnard, Aristide Maillol, Henri Matisse, Pablo Picasso, and Edouard Vuillard—as well as many who remain relatively unknown. His shrewd mind for business and artistic sense made him the leading contemporary art dealer of his generation. ~~ Quote here

Now, on to Bonnard, to support my thesis that he is a great
"painter of cats".

I discovered most of these paintings thanks to an online exhibition of National Gallery of Australia- Pierre Bonnard- Observing nature. Quotes below paintings are from that site, or from other sites I found in researching the Bonnard paintings. Links are provided.

Pierre Bonnard’s distinction as an artist is, in part, that his work cannot be easily categorised — it is not religious, or symbolic, or expressionist, or abstract, or surrealist, but remains quietly what it is. Nor does Bonnard force us to take notice with a manifesto, or a theory, or dramatic or bizarre depictions.

A keen observer of the life around him, Bonnard was alert to the changing moods of nature and of people and their surroundings. These ‘adventures of the optic nerve’, as he called his observations, were translated into carefully structured compositions filled with paint strokes of luminous colour. Rather than imposing himself on nature and reordering it in a radical manner, Bonnard opened himself to nature, observing its intricate detail.

He was particularly interested in intimate moments in which people are involved in a domestic setting — capturing them sitting in chairs, dressing, looking in the mirror, playing with children or pets, in the garden — innocently and unself-consciously immersed in their everyday world. This aspect of his work, and similar work by his friend Edouard Vuillard, was called Intimisme.

What is significantly different about Bonnard’s paintings is that they take time to view — as they took time to paint. Often lacking a focal point, the activity may take place on the periphery. 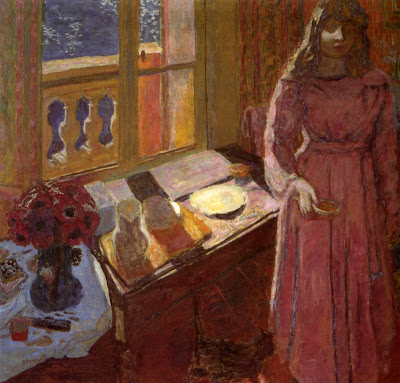 Pierre Bonnard - The Bowl of Milk (1919)
~~This scene takes place in Bonnard’s apartment in Antibes, where he often stayed during the 1910s. The Mediterranean glints through the window. Although he scribbled a drink for the cat on the bottom of the painting this image conveys far more than a woman preparing a meal for a pet.~~ More here . 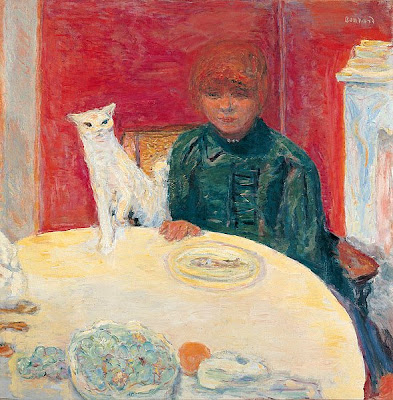 Pierre Bonnard - Woman with cat (1912)
~~The figure seated behind a curved and tilted table strewn with random ambiguous forms is a motif found often in Bonnard’s work. The woman dressed in a dark dress looks down, away from the viewer. The cat with ears flattened and paw upraised interacts more directly.~~ More here . 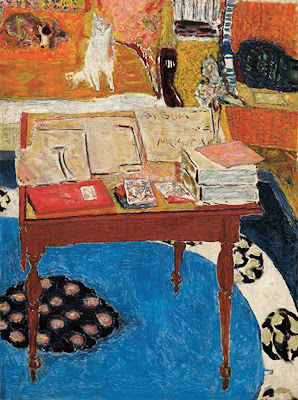 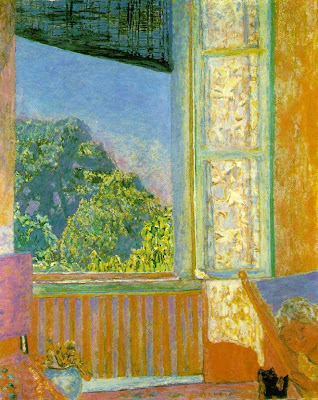 Pierre Bonnard - The Open Window (1921)
~~This is Bonnard's Open Window, one of the most popular paintings at Washington's Phillips Collection... It has film-still-like action going on at the edge of the canvas -- in this case a woman feeding or greeting a cat. It has signs of domesticity and, in a reminder that Bonnard liked his little psychological games, a tamed animal. After all, outside, beyond the open window, nature lurks and looms over the interior scene, hinting at wildness.~~ This intriguing commentary is part of more, here. This is a great art blog, btw! 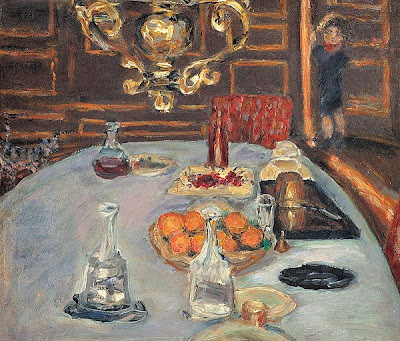 Pierre Bonnard - Table Setting under the lamp (c. 1899)
~~At the end of the 19th Century Bonnard, along with his friend Edouard Vuillard, explored domestic interiors, often containing little space and light. Emphasis was upon placement of objects and details of pattern and composition. Figures were are often obliquely placed and enigmatic in their expressions.~~ More here

-Quiz challenge: find the hidden cat/s in the Bonnard paintings.-

These are details of selected "cat paintings" above, but I am convinced that all have "hidden cats", some more easily spotted than others. 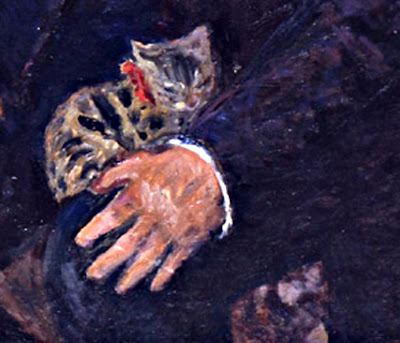 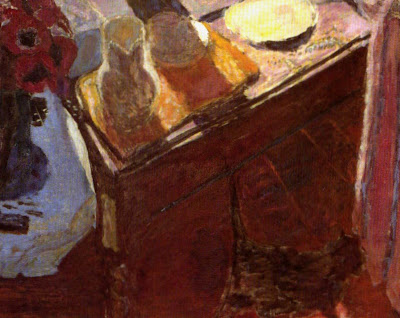 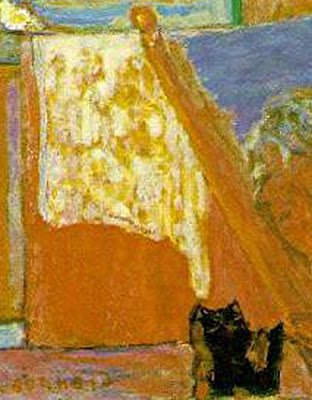 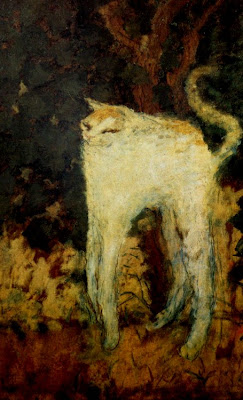 Okay, maybe I'm pushing the credibility boundary on the one above. It might have just been a coincidence of colors that Bonnard liked. But, as long as I'm pushing things, um, look at the larger version of "The Open Window" above. Squint your eyes, and see if you can find the "hidden cat" sitting on the woman's head. Maybe, or maybe not. Perhaps this is just part of the way that Bonnard painted. But, I am intrigued.

UPDATE 3/25: I received an email from Tyler Green in response to this post- He said "Bonnard's cats are the BEST cats. ;-) (Goya's are good too.)"

I noted above that Tyler Green's art blog is a great blog,
and linked it. Again, it is Modern Art Notes- with many kudos , including "The most influential of all visual-arts
blogs." --Wall Street Journal. And not only that, he's got cat aptitude!
Ambroise Vollard Bonnard cats in paintings paintings of cats Pierre Bonnard