My cat got her driver's license!

By VG - January 23, 2010
My cat got her driver's license! Well, that was my first reaction when I was given this, shortly after I went to pick Tootie up from the vet. I mean like, same plastic, same size, same terrible picture! I was so laughing. 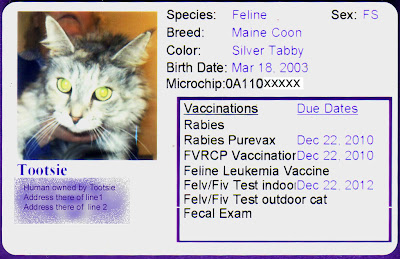 (some details above have been obscured to defeat potential catnappers)

Being the YouTube addict that I am, I HAD to go looking for cats who drive. UH OH! Toonces the driving cat! SNL.


Now I learn! Toonces has quite the history.... (quote from wiki)

Toonces was the family pet of Lyle (Steve Martin in the first sketch, thereafter by Dana Carvey) and Brenda Clark (Victoria Jackson), an enthusiastic couple who would allow their cat to drive the family car. At first, they were delighted that their cat had such an ability, but were always horrified to discover (too late) that Toonces was actually not a skilled driver at all.

p.s. for Michael my blog host- standards for getting a "driver's license" in many states of the US are appallingly low. Seriously, in some places... a cat might.... I have some perspective. I passed the UK driving exam on the first go-round, and I trust you know the significance of that. *g*
Cats in TV rescue cat Tootsie