By VG - June 04, 2009
Yes, twist ties are great cat toys! In an earlier post, I described how my Maine coon Tootsie led me to this discovery: Tootsie polydactyl Maine coon cat invents new cat toy-- as I said then:

Tootsie is a very resourceful cat. So, I am downstairs, and I hear thundering about upstairs. Not exactly the first time this has happened. She gets especially wild and crazy when I'm not watching. And then, out of the corner of my eye, as I am sitting downstairs at the computer, I catch a glimpse of her trotting across the kitchen with "something" in her jaws. And then I hear scraping noises. She's whapping that "something" about, as I shortly discover.

The figure below gives the details. Part a shows the "something" she was trotting around with. Why yes, it IS a twist tie, and it was included in the packaging for the Roomba I purchased. Part b shows my attempts to create other options, following on from Tootsie's toy invention. A scale bar is provided for reference. 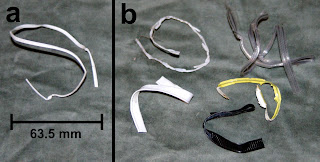 That was back in February. Events have progressed. I realized that it was a really BAD IDEA to let her get her paws on any short twist ties, especially the ones covered in paper, because she might chew off the paper, and the wire was short enough for her to swallow accidentally.

That didn't leave many options in from my twist tie collection. So, I went to the local hardware/ garden store, and found a roll of garden wire covered in study green plastic- on a reel with a convenient cutter. Huge success! 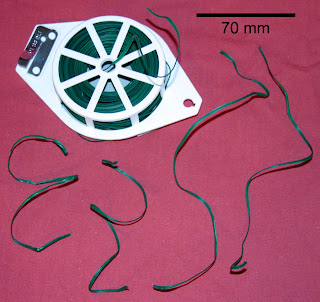 She absolutely loves these. I coil up about 6" worth for each one, and give it a toss. She goes into the cat crouch attack position and lets the fur fly. Bats them down the alley (hardwood floors), picks them up in her jaws, carries them around, drops them, attacks again. If any thing is going to convince me to get a video camera and make my own YouTube, this activity will be it. Totally hilarious!

It appears that Tootsie is not the only cat who has invented the twist tie cat toy. There are very few YouTubes that show cats playing with twist ties- this one shows a cat using a few of Tootsie's moves, but they're really small moves, compared to what Tootsie does with the twist ties. Tootsie is, like, totally more intense! Direct link for below