Maine coon grooming - Summertime and the shedding is easy

By VG - May 18, 2009
My Maine coon loves getting combed. Thank goodness, because she was shedding fur all over the place, now that summer is coming. Turns out that what works the best is a cheap plastic comb that I got from who knows where. She loves this comb! Purr time, big time. After I've run out of steam scratching her under the chin with it, she does the "cat flop" belly up, and waits... and purrs...

I've saved the fur I collected over the past 3 days, and set it out to take a picture, along with the comb. Crickey! She was watching, and was on the photo setup in an instant, disturbing the cloth background. But, so fascinating- it was the fur itself that really intrigued her. She sniffed and sniffed and... 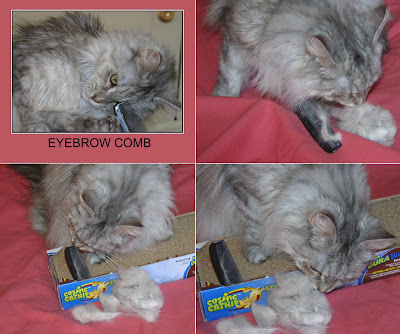 So, I put out the scratch pad to get the two photos at the bottom, and yes, eventually, she paid some attention to the comb.

But, this cheap plastic comb really is her favorite by far of the grooming tools I've tried. I have a whole collection of "cat brushes" that seem to work for other cats. But, I guess Tootsie just has her ways! ;)