By VG - May 28, 2009
Who was Orangey? Who was Rhubarb? Thanks to the wonderful help of "JB" in the Film & Television Unit here of the American Humane Association here, I've made great progress in solving the mystery.

I contacted the Film & Television Unit of AHA with several research questions, via email, on the off chance that I might get a response. Not only did I get a very prompt response, the person who emailed me back gave me exactly the information I was seeking. WOW! Thoroughly professional.

One research question (actually a secondary question) had to do with the filmography of Orangey aka Rhubarb the cat. I've been tracking the filmograhy of Orangey aka Rhubarb, who appeared in "Breakfast at Tiffany's" here, "Gigot" here and "The Incredible Shrinking Man" here, among many other films. I had spent a lot of time watching Rhubarb in "The Comedy of Terrors", and became convinced that this was NOT the same cat as "Cat" in "Breakfast at Tiffany's". 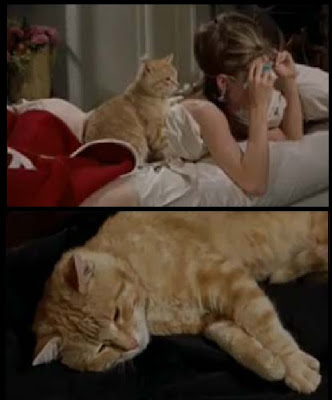 And, indeed it appears I was correct- not precisely about these two films, but I doubt that it was much different for any Orangey aka Rhubarb movie.

Frank Inn, who owned and trained Orangey aka Rhubarb, is perhaps the most renown "Hollywood" animal trainer ever. His work for Rhubarb (1951) was his break-through work, and from all I've read about him, it was thoroughly deserved.

"JB" in the Film & Television Unit at AHA put me on to the key information about Orangey and Frank Inn, which comes from the book "Amazing Animal Actors", here. Fair use is 200 words, so I've kept the quotes to that, but there's much more!

This describes Inn's work for "Rhubarb" the movie-

Because cats are difficult to train, Inn was not sure he could teach one cat all of the tricks necessary for the Rhubarb script. Instead, he acquired 60 look-alike cats and used 36 of them for the film. Inn trained each of the 36 cats to perform one or two tricks and used the cats interchangeably in the film. For example, when the director needed a cat to jump, Inn brought out one of the cats that could jump on cue. The cat would perform the trick, Inn would put the cat back in its crate and take out another that could perform the next trick requested by the director.

Inn had various names for the 36 cats with which he worked- Pie Plant (another term for Rhubarb), Big Boy, Long Tail, The 'Fraidy Cat, Little Britches. However, the official press releases from the studio promoted the story that one cat, Orangey, played the role of Rhubarb.

And, from the same book, these were rescue cats:

"So whenever I'd go to the pound, I'd pick up two or three cats that looked alike, struggle through, and try to get the job done," Inn recalled.

That seems to have been Frank Inn's way- work with rescue animals. Perhaps the most famous of these is Benji the dog, who he rescued from the Burbank Animal Shelter (click here and scroll down), and who had a long and illustrious career. And, unlike Orangey, it appears there was only one "original" Benji, and then, a successor Benji- the online sources seem pretty clear about this.

More about the Film & Television unit:

Established in 1940, American Humane’s Film & Television Unit is the leading authority on the safe use of animals in film. We are the only animal welfare organization in the world with on-set jurisdiction from the Screen Actors Guild to supervise the use of animals. We are also the only organization with the authority to issue our renowned “No Animals Were Harmed”® end-credit disclaimer.

We also collaborate with producers to include animal welfare messages -- ranging from condemning animal cruelty to encouraging pet adoption from shelters -- in filmed productions. The increased public demand for positive animal messaging has placed even greater importance on the inclusion of our “No Animals Were Harmed” end credit on TV programs and films.