Cats in Movies- Orangey aka Rhubarb- The Incredible Shinking Man

By VG - May 22, 2009
Orangey aka Rhubarb, winner of two cat "Oscars" (the PATSY) also appeared in a classic SciFi movie, "The Incredible Shrinking Man" (1957). I've been following up on Orangey's filmography. Click on the label "Orangey" to learn more about this very talented feline.

Promo for "The Incredible Shrinking Man". Direct link is here. 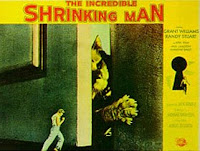 The image at the right comes from a great compilation of the best of 1957 SciFi movies, here. I don't normally pay much attention to SciFi, either books or movies, but I found the comments from this SciFi movie expert absolutely fascinating, because I am from the "duck and cover" generation. Here is a snippet from the linked page here:

A radioactive mist was the cause of Scott Carey's transformation into The Incredible Shrinking Man. This film took a serious, and somewhat adult approach to the terror of finding your world was becoming more and more outside of your grasp.

Equally interesting for me were these snippets from the site's main page, here.

The importance of the sci-fi films of the fifties - a personal view- Movies, like any good art form, are a reflection of their time...

In my mind, no genre of film has ever exemplified this better than the science fiction film. While the concepts may be (if you'll pardon the pun) alien to us, the best science fiction films still reflect the attitudes and culture of the times they were made. The "sci-fi" thrillers of the 1950s are some of the most interesting, fun and downright strange examples of films that reflected their time.

Why? Well, anyone who grew up in the fifties could tell you that the order of the day was paranoia. This was the decade which gave us the Red Scare, "Duck and Cover" and Joe McCarthy. It was A-Bombs for breakfast, fallout for lunch and radiation for dinner. It was at this time that Roswell, New Mexico may, or may not have been the site of our first official contact with extraterrestrials. Sputnik circled over our heads, spewing evil Commie Death-Rays (or so some would have you believe!)

And it was in this atmosphere in America that we saw some of the most terrifying (OK, for their time, it was terrifying), thrilling, thought-provoking, and weird films ever to fill the drive-ins and movie houses.

Now, back to Orangey- I captured some frames that highlight the role Orangey played in The Incredible Shrinking Man: 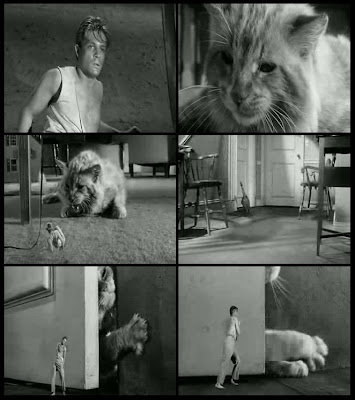