Cats in Movies- Orangey aka Rhubarb in "Comedy of Terrors" (1964)

By VG - May 30, 2009
I've been tracking the filmography of Orangey aka Rhubarb, and thus discovered "Comedy of Terrors" (1964). In addition to the cat acting, it has perfect performances by Vincent Price, Peter Lorre and Boris Karloff. This review of the DVD release is great in telling the how the movie came to be made. 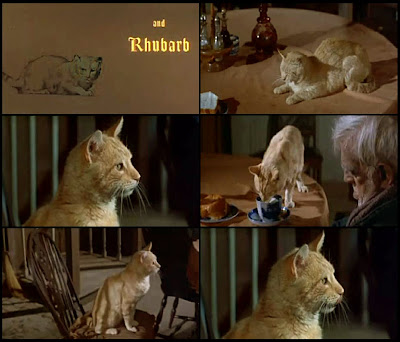 The snippet below is the last 3 minutes- the closing credits of the movie. I'm one of those movie goers who ALWAYS sticks around to watch the closing credits. And sometimes, there are surprises, well worth waiting for! And, this is great cat stuff.

Below is the first 10 minutes of Comedy of Terrors, where Orangey aka Rhubarb first appears as "Cleopatra", showing the "usual" talents of Frank Inn cats- going up and down stairs, snarling, and... It comes from Comedy of Terrors (1964), part 1/8 Follow the part 1/8 link, and you can click onwards to watch the movie from start to finish, thanks to a dedicated YouTuber jasongreenwooduk1, who has posted numerous classic horror movies.