Who's The Fairest of them All? Cats in Paintings and mirrors

For some reason or other I got into doing internet research into how cats have been depicted in paintings. Like, I have a gazillion links. But this painting by Frank Paton caught my eye because of my interest in how cats behave in response to seeing themselves in mirrors, and how cats perceive space.

I've posted several YouTubes of cats and mirrors click here , and my considered verdict is that they have no idea what's up with mirrors. Nonetheless, there is something essentially true about this painting: 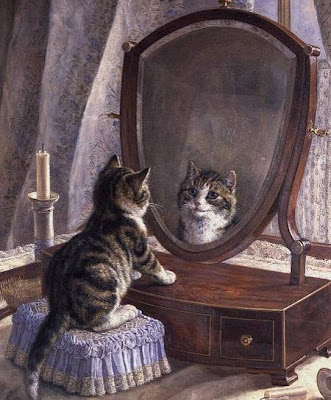 Quoted from wiki - Frank Paton(1855 - 1909) was an English artist of the Victorian and Edwardian eras, best known for his paintings of animals and scenes of rural life. His most famous compositions, "Fairest of Them All" and "Puss in Boots" (1880), have adorned many a wall in the form of plates and posters.

And, linked with painting, I found the first quote, and then after heavy use of the google (more details after), the second. Both are from the book "Concerning Cats: My Own and Some Others" by Helen M. Winslow (1851-1938) published by Lothrop Publishing Company, 1900.

"A charm of cats is that they seem to live in a world of their own, just as much as if it were a real dimension of space" Helen M. Winslow, 1900

"The term "Dutch rabbit markings" refers to the white markings on the cat of two or three colors. Evidently, the cats themselves understand the value of Dutch rabbit markings, as one which has them is invariably proud of them. A cat that has white mittens, for instance, is often inordinately vain, and keeps them in the most immaculate state of cleanliness." Helen M. Winslow, 1900

Oh my! The Paton painting (1880) has a cat with white mittens admiring herself in the mirror, and a cat that has white mittens is often inordinately vain (Winslow, 1900)! One has to wonder...

The first quote Helen M. Winslow quote is "quite about" on the internet, but the second, about the vanity of cats with white mittens, is not.

I found it because I became intrigued with the Helen M. Winslow book, and then discovered it is in the public domain, at least in the US. I downloaded it from Project Gutenberg and set about reading.

WOW! I've gotten into some unexpected byways during my short life as a cat blogger, and this is one of the better ones!
cats and mirrors cats in books cats in paintings paintings of cats