By VG - February 08, 2009
Marion in Savannah, a faithful reader and commenter on this blog has often mentioned "Hoover the Cat" (picture below). I asked her how she got Hoover. Or, perhaps, more correctly, how Hoover got her. With her usual excellent command of all things kitteh, she replied.

Here is Hoover on day 1, sleeping off the anesthetic after the visit to the vet. 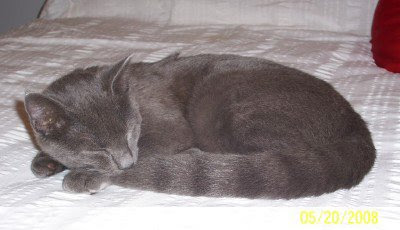 This is the story Marion in Savannah told me:

---Ah, where Hoover came from... I was sitting out in the garden last summer and a scrawny, SCRAWNY little gray kitten peeked around the corner of the house. I made welcoming noises and he came over to me. He was about 8 months old (best guess the vet and I could come up with), and had a ratty old flea collar on, so he must have been someone's kitteh at some point.

(It's a scandal here. There are 3 colleges in town and the college kids have an appalling habit of abandoning pets when they leave for the summer, so that may be where he came from.)

He came over, shed a few fleas to say hello, and turned on his motor. He's got a VERY loud purr... He was nothing but skin and bones, so I went and got him some food.

When I fed him he made a noise I've never, ever heard a cat make before, which I can't even describe for you. The best analogy I can come up with is if you had been crawling through the desert in the baking sun for days without food and water and someone found you, put an umbrella over you, and gave you a cool glass of water and your favorite food THAT'S the sound you would make.

Bringing him inside was a bit of a challenge because of Victoria, the Siamese. She's Empress Of All The Known (And Unknown) Galaxies and had very strong feelings about the matter.

Hoover moved into my bedroom/office/bath area with his own litter box, food and water and he and Victoria discussed the issue through the door. This was in July/August, and they've FINALLY gotten to the point where they can share a bed without slapping at each other. (I think it helps that Hoover now outweighs Victoria...!)----

Well, what can I say except that Marion in Savannah has a way with words, and a way with cats!