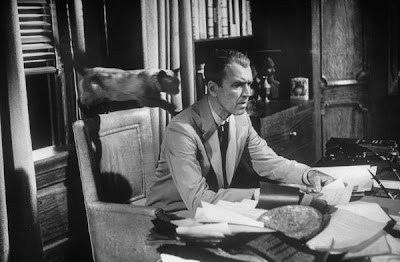 As I noted in an earlier post here, LIFE magazine has recently published an online archive of photos here, so of course I had to check it out for kitteh pix. LIFE caption of the above photo is: Actor James Stewart about to be pounced upon by a cat in a scene from the motion picture "Bell, Book And Candle". This started me off, because I love classic movies, and, of course, cats.

I have to confess that "Bell, Book and Candle" is a (perhaps minor) classic movie that I've never seen. But, my favorite "major classics" starring Jimmy Stewart include Mr. Smith Goes to Washington, The Philadelphia Story, Harvey, and Vertigo... OMG, it's hard to know where to stop with this list...

But, as poked around the Toobz to find more about "Bell, Book and Candle", my cat whiskers started quivering...


Above is a snippet from the film trailer, which is a "must watch"- not only to find out the cast of classic actors, but because, as film trailers go, it's pretty darn good.

Having not watched the movie, I poked around on YouTube, to see if there were clips available. All I could find was one dubbed in Italian. I have to say it gives a new dimension to the actors- Jimmy Stewart and Kim Novak- to hear them speaking in such a lyrical, expressive language. As for Pyewacket, probably no dubbing required- the language of cats is international.

And, by the way, I assume, correctly I hope, that "Bell, Book and Candle" has a happier outcome than "Vertigo" (which also stars Stewart and Novak). Nope, I don't think he threw her off the bell tower this time...

UPDATE 5/17/2009 I've been doing a lot of research on "cats in movies", and also on the PATSY awards to follow up on a more recent post about Orangey the feline star here. I discovered that Pyewacket won the PATSY in 1959, and was owned by Frank Inn the renown animal trainer (tho he did not train Pyewacket). I discovered this, and more via a set of photos at flickr, which are available to view, but not to copy (copyright protected)- links are here and here. (also there is a "co-owner" of Pyewacket, but I can't read the inscription)
cats in movies movies Siamese cat Thai cat