By VG - September 22, 2008
ohhh... this is a wonderful YouTube. It's 4 mins long, longer than I normally post, but it's worth every minute. This Swiss household has 9 Maine coons, the special stars being the 6 new Maine coon kittens. Totally sweet! Totally charming!

I found this because I was checking out comments at YouTube about another really charming YouTube that I had found, and featured before. C'est ici .

And, I had a smile when I saw that one of the 6 new kitties (all with names starting with Z) was named Zizou! Way back when, my FDL pal Punaise had just gotten a new kitteh, and the Punaise household was going back and forth about what to name him. It was during the World Cup. I was rooting for the name Zizou, but, um, that name became a bit notorious. Sigh. The new kitteh in the Punaise household was named "Louis, le chat". Not sure which Louis they had in mind, with that name, though! Some of them are, er... a bit notorious, aussi!


Direct link to above, here. 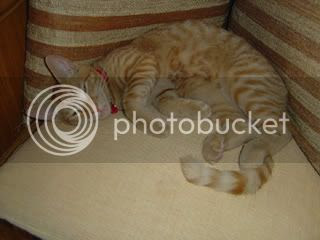