By VG - November 09, 2008
I recently featured a charming YouTube about Henry, The Feline Fiber Artist. Now, thanks to more information provided by Anita, Henry's Human, I can give you the scoop! This is from the Bangor Public Library flyer advertising Henry's show of his fiber arts. --Fiber Art Wall Hangings by HENRY--

~~Henry, Anita Louise McCormick's cat, is a fiber artist too! He specializes in creating unique fiber art wall hangings. Anita adopted Henry from the Airport Mall pet store in 2002 so her other kitty, Alice, would have another cat to play with.

Henry's talent as a fiber artist was discovered when his frustration with traditional scratching posts led Anita to purchase rug remnant pieces from Marden's, and nail them to the wall. It did not take him long to discover that not only did he now have a great place to sharpen his claws, but it proved to be a wonderful outlet for his artistic abilities!

When a new piece of rug is attached to the wall, Henry takes time to look it over to see how he can best use it to express his ideas and feelings. Then he begins his work, pulling a loop out here and a thread out there, until the piece is finished.

Most of Henry's fiber art wall hangings take months to complete. As soon as he is finished, he lets Anita know so she can remove it from the wall and replace it with a fresh piece of carpet.

While Anita has displayed Henry's wall hangings in her apartment for some time, this is the first public exhibit of his work.~~

If you doubt that Henry IS a true cat artist, here are close-ups of Henry's fabric art from his public exhibition: 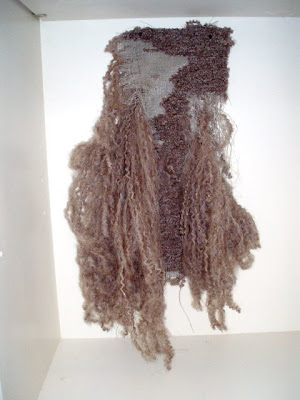 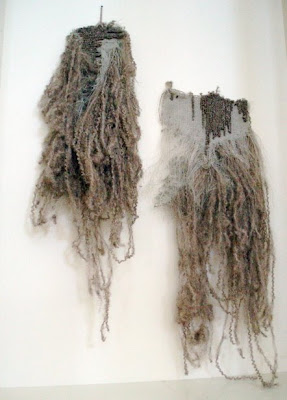 Update- Anita left a note in the comments that Henry has become so popular that he now has a store at Cafe Press.
cat artist moggie rescue cat