By VG - November 26, 2008
I've been thinking about doing a post on "teh Awesome Equine Cat Brush" for quite a while. I finally had to do it, after seeing this, along with the Human's comments:

Human: Poor Cody. He loves water soooo much, but his fur tends to get matted because of it. We had to take him to the groomer's for help this time around. The best they could save of his fur was "the lion cut". Most of his tail and mane were saved by my request. Cody's so easy going he was OK with it, but Jack (our red) didn't like it and would hiss at poor Cody. They're best buds again though - not to worry. :)

I'm thinking that the Human of Cody and Jack needs to get "teh Awesome Equine Cat Brush". (Cody and Jack are Maine coons)
Direct link here (1:45). 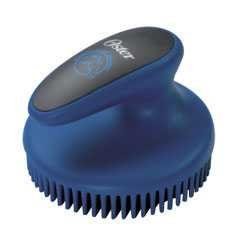 Teh "Awesome Equine Cat Brush" has a bit of personal history attached. I first bought one of these at Agway when I was visiting my best college friend in CT, who had a long haired cat. We went to Agway so that she could get kitty litter etc. I was checking out cat brushes- thought the kitties needed a cat brush- but unsatisfactory selection there- and then stumbled into the equine area. I saw that brush, and thought "Aha!" This is IT.

Kitteh and I became instant friends-- shy cat, didn't accept strangers, even though I have been part of the "household" ever since when. "Smoot" was "transformed" after my use of the "equine cat brush". Her son said "Smoot feels so much better about himself!" Crikey, and then Smoot even came when I called him.

After that, I was so in love with "the equine cat brush" that I was pushing it in comments at a non-cat blog, where one of the commenters had said that he owned 3 Maine coons. Well, with my repeated pressing he went and got one, and the kittehs loved it. And, I finally sent 3 to another commenter (also a virtual friend) and the Maine coon kitteh loved it(sent 3 bec. that complied with the minimum $$ order at the site I found, and I knew he would not get one unless I sent it to him)

Fast forward, 2 years. So, I am conversing with snowmominator, after she posted an awesome YouTube of Louie the 30 pound Maine coon, which I featured here.

snowmominator: All possible negatives considered... long hair, kitty on the piano, (etc) ..I would never have anything but a Maine Coon. They are better than humans.

me: I'll have to send you a link privately for what I call "the equine cat brush", because apparently YouTube stiffs links. It's actually a horse curry comb- I sent one to a friend in OR who got given an "unknown" cat, who, it turns out is most likely a Maine coon. Kitteh loves it, and cut down the "hair everywhere" problem big time ;)

snowmominator Yes, I have that very same brush.

me: OMG! Now that is just plain er... unexpected! Or, cosmic, or something...

snowmominator: It is funny isn't it. But I'm a farm girl, I knew his (Louie's) undercoat needed to managed properly or he would have health problems.

So, the "equine cat brush" is a continuing part of my kitteh experience, one way or another. Pretty amusing!
At the time I was trying to find one to send to my online friend in OR, this was the only online supplier I could find. But, by recent googling, I've found another source as well, which, of all things, is an equine site. LOL.

And, postscript: what can happen to kitty bloggers and YouTubers: One of my very first posts featured Jumpin Jack Flash and Cody using the TurboScratcher. Music by the Stones. Jumpin Jack Flash. Brilliant YouTube. But, I see that it is no longer available on YouTube because of "copyright violation". Sigh. So, the human of Jack and Cody stepped on some toes in the "Stones ownership" lawyers' gig. Very silly, if you ask me.
cat brushes grooming a cat Maine Coon