Extraordinary Navigator on the Thames- 1815

By VG - January 20, 2009
Well, one just never knows what one will find on the Toobz. After the previous post, where I said I was still searching for something about rowing in a feline fashion, I found this, via a site about rowing on the Thames, via ThamesPilot here: 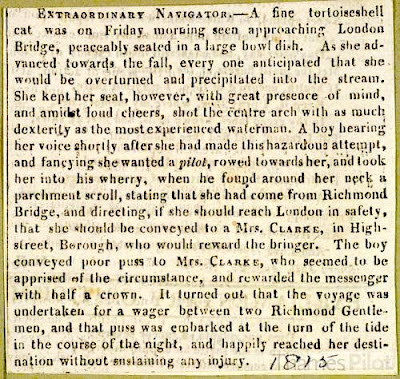 Snippets: "A fine tortoiseshell cat was on Friday morning seen approaching London Bridge, peaceably seated in a large bowl dish. As she advanced towards the fall, every one anticipated that she would be overturned and precipitated into the stream. She kept her seat however, with great presence of mind, and amidst loud cheers, shot the centre arch with as much dexterity as the most experienced waterman. A boy hearing her voice shortly after.... rowed towards her and took her into his wherry, when he found around her neck a parchment scroll, stating that she had come from Richmond Bridge...... It turned out that the voyage was undertaken for a wager between two Richmond Gentlemen."

Oh, those Richmond Gentleman... they are such scamps!