By VG - January 27, 2009
As a result of discovering Bell Book and Candle, featuring Siamese cat Pyewacket (and some minor humans) I set off on a google adventure. I found a site with these two pictures: 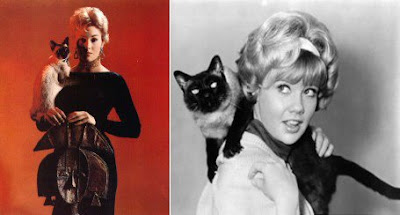 Captions: (left)Gorgeously draped over the shoulder of the stunning Kim Novak is Pyewacket, of Bell Book and Candle 1958 (right)"DC", That Darn Cat Walt Disney 1965 played by Syn Cat, with Haley Mills.

Oh, btw, the original post about "Bell Book and Candle" is here , and has a great video of Kim Novak and the cat.

This statement from the photo above intrigued me: "These are what a Traditional Siamese Should look like-- Nice formed bodies and gorgeous expressive heads. Another popular style of the Siamese is the Modern (Americanized) also known as Show Style Siamese".

Aha!, I said to myself, I know (something) about this, because I'd previously read Michael's articles at POC. I learned that the "Siamese cat" has a long and complicated history. The original Siamese cat, imported to the US, was modified via cat breeders, with encouragement from "Show Cat" organizations, to take on the look of what, in these circles are now "Siamese cats". They decided to "refine" the cat's appearance, "a bit like an over done face lift" Michael says, and I can't disagree.

The look of the original Siamese was, for quite a time, left behind as an acceptable "professional" version of the Siamese cat-- so much so that they had to reclaim their identity by being called "Thai cats" (Traditional Siamese). This is the view of some people in any event. As Michael says: "Siamese cat history took a turn when the appearance changed over the last 50 years to the extent that the original "normal" conformation was so far removed from the new look that it was outlawed (by professional cat associations) and cats of that type (the original type) could not be shown."

Okay, now back to the scheduled movie- wherein the cat garnered the following review- "The feline that plays the informant, as the F.B.I. puts it, is superb. Clark Gable at the peak of his performing never played a tom cat more winningly. This elegant, blue-eyed creature is a paragon of suavity and grace"


And, one of the funniest scenes I found from the Italian version (Un gato del FBI)- in keeping with the "International cats" theme... Direct link is here(2:21)


My movie research didn't end there, and I will feature "modern Siamese" in an upcoming post.

P.S.- it appears that a YouTuber has posted the entire movie, in ~10 min segments. I say "appears" because I haven't watched all the posts. But, you too can start here.
cats in movies international cats movies Siamese cat Thai cat