By VG - January 22, 2009
Ahem, until very recently, I had contented myself with the joys of watching my "virtual" kittehs at YouTube. Had many kittehs before, but I was still suffering "kitteh grief". At the same time, there was this little niggle in the back of my mind: move on, move on. So, for quite a while, it's been brewing.

I got out my camera today, and managed to take a kitteh pic before the camera battery stopped working. Kitteh is very camera shy, but not so bad on her debut. I removed the camera battery so that I could recharge it, but left the camera with kitteh, so that she could befriend it. When I snuck out, she was rubbing her face against the edges of the camera. She's got a plan...

Here's my first photo of Tootsie, the polydactyl Maine coon: 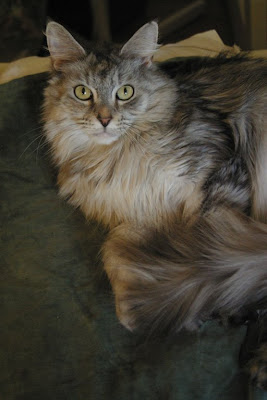 I found her online, via a local cat rescue charity. Uh, this was the photo they posted: 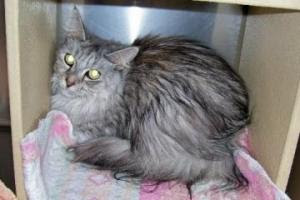 And, the description was not exactly encouraging either- shy, needs patient person, etc. But, she is a purebred Maine coon, and I've long been fascinated by tales of the Maine coon. She was put into rescue because her owner became ill, and could no longer care for her.

The mind wheels were working, and I just had to go check her out. That was an adventure, even before I met Tootsie. Driving down the highway... car didn't seem quite right somehow... so, I was not speeding, contrary to my usual practice. Ka thunk ka thunk slam bang- tread on left front tire had separated and flown off to never never land. Thank god I have AAA. So, I got to my kitteh meeting about 4 hours late. And, as described, kitteh was totally shy, hardly would let me get a look at her-- but I got to hold her (while she struggled) for about 2:13 minutes, and I just knew she would be fine. More about her delightful caternality in some later post.

But, for now, I'd like to add something that made me so sad. A few days after I adopted Toostie, I got an email from snowmominator telling me that King Louie, the fabulous Maine coon, had passed- and only 8 years old- due to asthma and cardiomyopathy. I wept.

I've featured Louie on the blog before, and this news just broke me up. I consider Louie to be Tootsie's godfather, because it was this YouTube that finally convinced me to take the plunge, and adopt Tootsie.
Direct link is here (1:42)

And here is King Louie loving his boy: Direct link is here (1:13)

It is totally impossible for me to watch the above YouTube without bursting into tears, again. But, I have no doubt that anyone who's ever lost a kitteh friend will, well, just KNOW.
cat photograpy kitteh grief Maine Coon polydactyl rescue cat Tootsie