Tootsie my Maine coon is afraid of thunder

By VG - February 22, 2009
There was a huge thunder storm here the other evening. Poor Tootsie. It really freaked her out in way that I've not see before. She bolted to some hidey hole, but then I tried to comfort her. I called her, and she emerged, but she came to me in a manner of "walking" that was something I'd only seen a cat do once before.

Yes, she came to me. But, the way she moved- every part of her was as close to the floor as possible. Her front part was so hunkered down that her shoulder blades were above her spine. Almost the same for her hind parts. Her belly and her tail were wiping the dust off the floor.

Of course, I couldn't get a picture. I tried to find a picture online that showed this stance, without success. I tried every sort of google search term. She wasn't stalking. She wasn't creeping. She wasn't sneaking. She was doing something else more intense. Here are two images I found, which are the closest I could get to describing her stance. But, really, they aren't even close. They are, oddly enough, from the Royal Copenhagen site, which has some lovely porcelain figurines of cats. I'm reconnecting with my Danish heritage in an unexpected way.

And, in addition to looking for pictures, I also did teh google, to find out about cats and thunder. All of the links I found gave pretty much the same information, so I'm not going to link to any, because I can't tell who or which is the primary source. But what I learned was that my instinctive cat mom response was exactly wrong. I tried to comfort Tootsie. Bad idea, it seems- a sample of comments from teh google-

~~Also during storms, resist the urge to cuddle or comfort the cat because this just reinforces the fear. Instead, keep your mood light and casual. Letting the cat know there's nothing to worry about helps tremendously.~~

~~Similarly, if the owner attempts to comfort the animal, the animal interprets it as confirming there really is something to be afraid of. The petting or comforting is really positive reinforcement of an undesirable behavior.~~

My google adventures gave me a lot of information that I'll wrap up in a later post. But, for now, I found this comparison interesting. How loud IS thunder? Look and see: 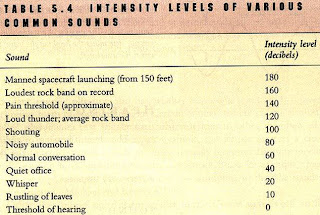 And, don't be misled. 120 db is way louder than +20% of 100 db. The decibel scale works logarithmically. When a sound increases by 10 decibels, it is 10 times louder.
Maine Coon rescue cat Tootsie