My Roomba cat experience- Not recommended!

This is hilarious. It's new way to exercise the kitty. As a result of watching this video, I bought a Roomba online. I recently adopted a Maine coon (purebred) 5.5 yo female from a rescue shelter. She emerges from under the bed wearing dust bunnies. And, I want to make sure she gets enough exercise (indoor cat). The Roomba has yet to arrive, but I'm hoping it will help on both accounts...


I mentioned in a post about cat brushes- Will cat brushes become my new obsession? that I'd give an update on the Roomba project. There were some questions and opinions in the comment section. Marion in Savannah: Should I get one? Is it too good to be true?

I can't give an authoritative answer to that- but I will reprise my comments and those of another Human (karen marie), edited a bit for clarity, with extra comments. We seem to have similar opinions and experience.

First, though: here are my photos of the Roomba I bought, and how it looks after a few uses- (click on pic to see enlarged images of Roomba) 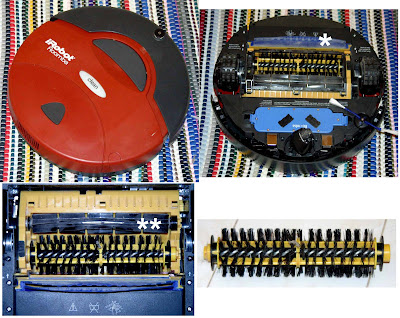 So far, it's been a disappointment. I've only tried it on tile (Tootsie's bathroom) and hardwood floors. It navigates the areas just fine, but the brush is too coarse to pick up fine dirt. Everything depends on the brush, as there's no suction. Haven't tried it on carpet yet. But, my "cheapie" (!!) model did not live up to the 5 star ratings it got.~~

~~my advice: don't buy a roomba. i bought one and it lasted less than six months. i had two dogs and two cats, wood floors, no rugs at all, so i just wanted it to run around and pick up the animal hair every day.

the thing is badly engineered. all the "guts" are open to the dust and hair you're trying to vacuum up. fine dust quickly accumulated in areas that you couldn't clean easily and would cause it to stop working until you'd spent twenty minutes with a pair of tweezers picking it out. it finally stopped working altogether after six months and went out with the trash.

a broom is a lot cheaper and can be just as entertaining for your cat.~~~

VG (me): ~~karen marie- thanks! It sounds like your experience was pretty similar to mine so far with hardwood floors. When I went to check out the reviews before buying they were almost all positive. 5 out of 5 stars. I'd give it a 1 star at best. I had hopes that once I "figured out how to use it" my rating would change, but not so far. As you say, a broom does a lot better job! Or, a damp mop even with water only.~~

Here are a few more thoughts, with reference to the pix. Okay, maybe that blue flap thing (*) and the item that rolls with black flaps on it (**) are supposed to be equivalent to "fine brushes", in addition to the obvious, coarse brush. But, imo, they don't do the job. Not shown in the pix are the fine hairs wrapped around the "end axles" (or whatever) of the "brushes". Yep, it would take a robust pair of tweezers to remove these. And, hmmm... look carefully at that series of symbols- are they saying that you shouldn't wash the Roomba, only dust it off?

Oh, and did I mention that Maine coon cat Tootsie hates the Roomba? She's okay with the noise of the vacuum cleaner, but the clattering of the Roomba sends her bolting into a hidey hole.
Maine Coon Maine coons on You Tube roomba Tootsie