By VG - February 28, 2009
I've worried about Tootsie getting bored, especially when I'm not around.

I bought a few "official" kitty toys. The only one she liked was the feather toy. Deal is, though, that she ran off with the feather part, and I haven't been able to locate it.

I'm beginning to suspect that this was her way of mentioning to me that she was now bored with the feather, rather than her having forgotten where she put it.

Why do I say this? Well, she was really nutty for plastic straws for a few weeks. But now, they just don't seem to hold the same fascination. Used to be that she would throw these about, jump on them, and push them off high places, without any intervention from me. Now she pretty much ignores them, even when I try to get her interested.

But, whew! Tootsie is a very resourceful cat. So, I am downstairs, and I hear thundering about upstairs. Not exactly the first time this has happened. She gets especially wild and crazy when I'm not watching. And then, out of the corner of my eye, as I am sitting downstairs at the computer, I catch a glimpse of her trotting across the kitchen with "something" in her jaws. And then I hear scraping noises. She's whapping that "something" about, as I shortly discover.

The figure below gives the details. Part a shows the "something" she was trotting around with. Why yes, it IS a twist tie, and it was included in the packaging for the Roomba I purchased. Part b shows my attempts to create other options, following on from Tootsie's toy invention. A scale bar is provided for reference. 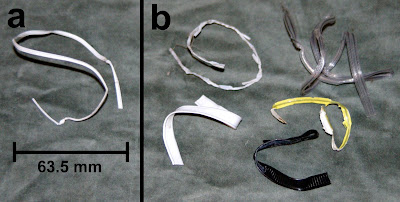